Destroys only the fat cells via cooling of the skin!

CryoSlim is an AdipoCryoApoptosis device that uses a new technology, based on a century old physical principle – the adipose tissue cells (adipocytes) are more sensitive to a prolonged exposure to cold than other cells. CryoSlim® reduces localized fat deposits by destroying the adipocytes.

The technique combines the vacuum suction of the skin through a specific hand-piece, named Cryode, and cooling of the temperature to -0.5° C (31.1°) or 0.5° C (32.9° F). The result is a crystallisation of lipids in adipocytes, which marks a point of no return in the evolution of these cells and this, of course, without harming adjacent tissues. Adipocytes are therefore programmed to a slow suicide (called apoptosis), which generates the slow elimination of their content from the body, without significantly altering the rate of blood lipids (cholesterol, triglycerides etc.). The skin surface will adapt easily to the morphological changes involved with the treatment.

A.C.A. Technology by CryoSlim - The AdipoCryoApoptosis technology destroys only the fat cells, not the fibrous structures. click to expand

AdipoCryoApoptosis, also called Lipocryolysis (fat destruction by cold), is a novice, non-invasive and painless method of selective liporeduction, used to reduce the localized fat cells. The technology is based on a physical phenomenon, which has been well documented – the Peltier Effect. A specially designed applicator vacuums the skin until it comes to contact, and a mechanism (compared to a heat pump) extracts the calories from this area. In a few minutes the temperature decreases from 37° C (99° F) to almost 0° C (32° F). When targeting specific areas, this technique of AdipoCryoApoptosis allows to avoid liposuction and even localized laser lipolysis.

This treatment mostly concerns patients without significant excess fat but who have one or several localized fat areas that are most often resistant to dieting efforts.

These areas are for example the localized fat of abdomen or below the arms. Smaller areas (such as inner thighs, back’s fold, buttocks and neck) can also be treated through a  smaller-size Cryode. CryoSlim® can also be a good indication as a complement to liposuction, so as to complete or perfect certain areas.

Before the treatment of arms, legs, neck, dorsal area and bottom, a clinical examination allows to know if the area in excess weight is composed of adipocytes.

Clinical estimation of fat – in order to differentiate fat and fiber, a pinch between two fingers is usually enough. When you pinch the fat, it is elastic, when you pinch the fiber, you feel an incompressible resistance. A scan can confirm the clinical diagnosis.

The quality of the results obtained by CryoSlim AdipoCryoApoptosis device is due to its technology. The Cryode‘s metal driver ensures fast and homogeneous cooling. Controls of operating parameters are numerous and significant. They provide complete safety to the patient.

✓ The temperature control is precise (step of 0.5° C) in order to avoid any “over-cooling” of the area. The decreasing speed of cooling can also be controlled.
✓ The power and level of the vacuum can be controlled, as well as the slope of the depression.
✓ If the operating physician determines that the configured automatic programs are not suitable, he/she has the possibility to use the Expert program. 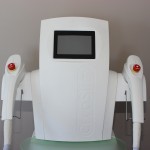 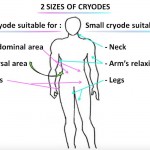 Uses of Cryodes by Type

Included in the package:
– CryoSlim;
– 50 filters.